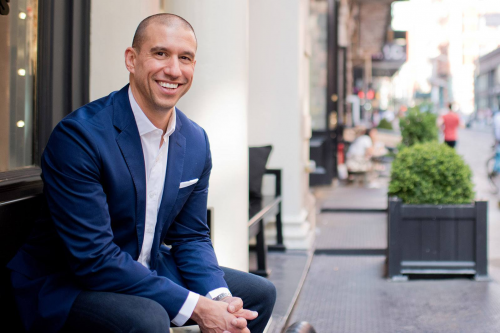 Michael Cinquino is a professional photographer, speaker and on-camera coach. His work has been published in Harper’s Bazaar, The New York Times, Business Insider and on TV networks such as ABC and Comedy Central. He continues to help hundreds people overcome their fear of the camera and learn to use it as a tool to attract whatever it is they want. And he’s done it for over a decade. Michael’s background and training is vast and diverse. He holds a Bachelors Degree in Theatre from DeSales University and a Masters Degree in Acting from Rutgers University.

His business training comes from working daily for over 5 years with a leader in the technology industry who advises the CEO’s of companies such as Oracle, Dun and Bradstreet and Akamai Technologies. Michael acquired his leadership skills at a young age while serving 4 years on active duty as a Rescue Swimmer in the US Navy under Tom Gun Commanding Officer and F-14 Fighter Pilot Captain Brent S. James. Michael’s hobbies include Martial Arts – he holds a 1st Degree Black Belt in Hapkido, watching Academy Award acceptance speeches on YouTube and has recently begun training for his helicopter pilots license. Michael continues to reside in New York City which has been his home for over 11 years.