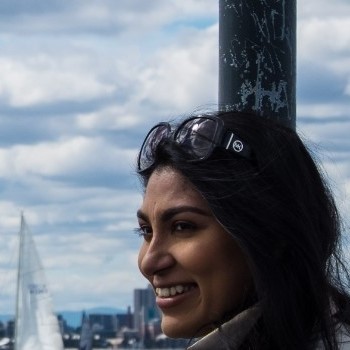 Award-winning journalist Ginni Saraswati launched her show “The Ginni Show – Curry, Comedy & Connectivity”.  The Ginni Show invites listeners to follow the hilarious journey life of a young Sri Lankan immigrant woman growing up in Australia. Her podcast features weekly drops of Wisdom on Wednesday and her new feature – Monday Mocha, the podcast to start your week with that hit of coffee and inspiration with various guests from celebrities to influencers around the world.

Ginni Saraswati is the media personality you’ve heard on the airwaves, seen on your TV screens and at many festivals and events around the world.

From Melbourne, Australia, she has been known to stun many a personality with her quick witted introductions and on air antiques which left Paula Abdul in a laughing fit and Havana Brown choking! Because indeed, she has already interviewed them all – almost! From KD Lang, Eric Bana, Jennifer Beals, Ruby Rose to Martina Navratilova, Marlee Matlin and Peter Paige, the list goes on.

It’s no wonder this perky and highly entertaining radio host has just been nominated for the Australian LGBTI Awards 2017 for Broadcaster and Presenter of The Year http://www.australianlgbtiawards.com.au

In 2016, she ranked number 12 in the LOTL Power List – Australia’s leading magazine for women of the LGBT community.

As one of the fromer co-hosts of one of Melbourne’s popular morning radio shows Rise Up, for many years she continuously brought sass to the airwaves with fellow co-host and Melbourne comedian Adam Samuel, broadcasting the latest news, and interviews with local & international celebrities, and always having the last word!

In 2015, Ginni was awarded the International Edward R. Murrow Media Award (USA) for her achievements as an international radio and television journalist both within and beyond the LGBT Community.

1424:Marc Morrell is the Host of Let’s Voltron: The Official Voltron Podcast

1424:Marc Morrell is the Host of Let’s Voltron: The Official Voltron Podcast

685:Rhonda Boyle is a transformational leader and the founder of the Yellow Sub Group

685:Rhonda Boyle is a transformational leader and the founder of the Yellow Sub Group