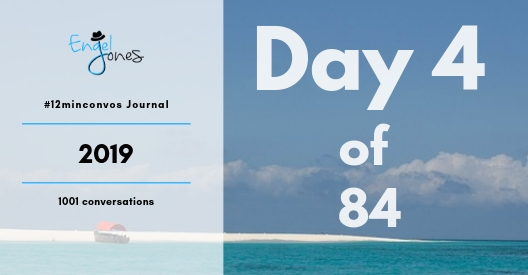 Day 4 started at 4:30am afer going to sleep the night before at around 12pm. This might have been a bit of an over push and during the day I did feel the effects of it.

My first #12minconvo started on the button at 5:00am with Troy Devine who is located in Queensland, Australia. Troy is host of THEGIFT podcast. I thourgoughly enjoyed our conversation as we delved into how overcoming adversity led to him being on a path of mindfulness. Listen to this guy's voice, it's mesmerizing.
More to come on his #12minconvos podcast #2040 when released. Sneek Peek -Her favourite song at 12 can be listened to here.

Who else did you speak with?

1) Nako Mbelle, FinTech recruiter, Cryptcurrency and Blockchain lover located in Toronto, Ontario. You could hear the love for the experiences she has had while delving into all that goes with it. Interestingly enough after our recorded conversation Nako told me that her mother is actually from Tobago, the sister isle of Trinidad. I thought I was hearing a bit of an accent. Nako is also the host of Around the Coin - Fintech Podcast. More to come on her #12minconvos podcast #2041 when released. Sneek Peek -His favourite song at 12 can be listened to here.

2) Cameron Martinez, President of LVRG who is responsible for saving their community of entrepreneurs over 4 million dollars annually while feeding 150,000 people all around the world. This young man is seeking wisdom and I believe that it will be his power move in the future. More to come on his #12minconvos podcast #2042 when released. There is no Sneek Peek of His favourite songs at 12. He did say Backstreet Boys but could not remember the name of the song. This has happened on countless occassions before.

3) Nevin Webster, Canadian Podcaster & Digital Media Strategist located in Kamloops, British Columbia, Canada. He creates a weekly podcast about his town called Kameo with Nevin Webster. Nevin shares openly of his challenges where he takes down the curtains of the curated conversation. More to come on his #12minconvos podcast #2034 when released. Sneek Peek -His favourite song at 12 can be listened to here.

4) Grant Garrison, Multi-media specialist located in Longmont, Colorado. Grant has had a host of experiences working alongside some amazing people. Grant is jack of all trades. More to come on his #12minconvos podcast #2035 when released. Sneek Peek -His favourite song at 12 can be listened to here.

What was your biggest takeaway?

1749:Heather Smith says: Tell me what you do and I’ll tell you how to automate it

Andrea Goulet is the CEO of Corgibytes /Ep2249

656:Holly Worton is the business mindset mentor for women entrepreneurs

1098:Lindsay McKinnon is a Wisdom Weaver, a Bridge Builder, a Truth Seeker, a Catalyst, a Holistic Healer, and a Midwife of Souls