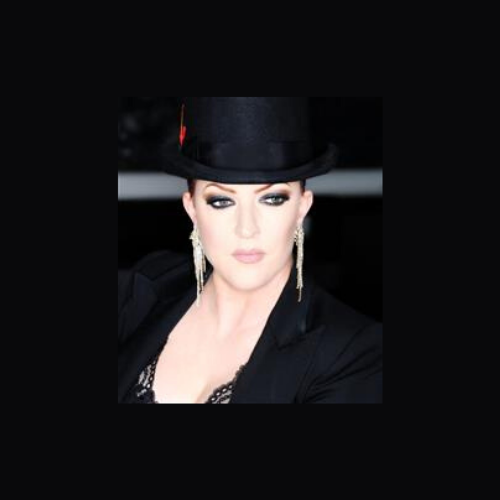 April Doyle’s vast experience in the entertainment industry began with successes in both the acting and modeling fields. Also displaying a unique vision and talent as a makeup artist/stylist, April quickly gained recognition in the beauty industry and found herself working with some of most influential names in the business.

These talents were added to when April’s music career took the forefront with her first real musical endeavor with one of Southern California’s most highly successful show bands. While working with the band April traveled the globe building a name for herself as a top caliber performer. Her talents, experience and vision all converged resulting in her next musical endeavor – in the corporate entertainment industry, Haute Chile Productions- which launched in the early 2000’s. This slick, high energy showband quickly became one of the top requests in high end, corporate celebrity, socialite and notable charity events.

Comprised of some of the best studio musicians Los Angeles has to offer, HCP has performed for everyone from Hugh Hefner to the Presidential election, including many international performances. HCP has an unrivaled list of credits, client list, notable performances, and has truly carved out its own niche as one of the most successful entities in corporate entertainment.

April and the Velvet Room~
April’s latest project ……. April and the Velvet Room…..
The brain child of April Doyle and producer Kevin Flournoy. What’s special about the Velvet room is you never know who you will see on stage at any given performance, but you will definitely be pleasantly surprised. Some of the industries “who’s who” show up and enhance this “classic-neo-jazz-funk” vibe, with an international touch.

At any given performance you will be entertained by the vocal stylings of April as well as different artists who perform regularly with Stevie Wonder, Steely Dan, Rod Stuart, and Babyface, to name a few.

April & the velvet room~ is an experience of smooth, upper scale, original music complimented by iconic, esoteric classics definitely appealing to a wide audience, all delivered with an intimate concert level of performance~

948:Madelyn Victoria- “Country music hits the heart, and feeds the soul; it’s the story of all our lives in one way or another

948:Madelyn Victoria- “Country music hits the heart, and feeds the soul; it’s the story of all our lives in one way or another

1857:Alexander Jarvis is the founder of Perfect Pitch Deck.

1857:Alexander Jarvis is the founder of Perfect Pitch Deck.

1186:Maura Sweeney is the Trademarked Ambassador of Happiness transforming a “Living Happy – Inside Out”

1186:Maura Sweeney is the Trademarked Ambassador of Happiness transforming a “Living Happy – Inside Out”
Load More