Click on ▶ to Listen (10:45)
0.75x
1x
1.25x
1.5x
2x
0:00
10:45
Apple PodcastsGoogle PodcastsPlayer EmbedShare Leave a ReviewListen in a New WindowDownloadSoundCloudStitcherSubscribe on AndroidSubscribe via RSSSpotifySubscribe on iTunesGet My Workbook 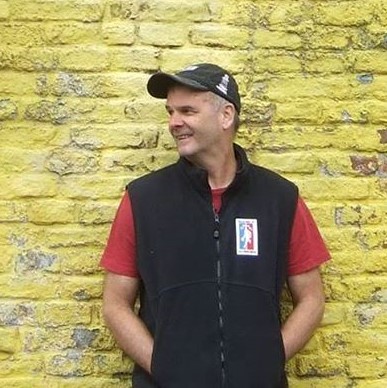 As creator of the Trademarked MIKE sports character, I’m known as the MIKE Maker.

What — or who — is MIKE? Mike’s a witty, alter-ego sports entertainment character destined to deliver unexpected fun, engagement, content and creativity to fans.

Who owns MIKE? I do, with my wife of 38 years. Together, we have personally financed and own all of MIKE’s animation, illustration, music, web site development, podcast production, marketing and travel. Legally, we are completely unencumbered. Developing, cultivating and creating MIKE content is my full time gig.

Goal for MIKE – The ultimate goal is for MIKE to become the first ever universal animated brand to transcend all sports as a global entertainment icon. We’re talking Spongebob, Mickey Mouse and Bart Simpson with an international following. Not only is a microphone’s image universally acknowledged, but MIKE is the world’s third most popular name and is easily translated into most languages.

MIKE competitors – There are none. His straightforward design speaks of him being the “ultimate talking head” on sports. The only other animated sports brand with any media credibility is Cletus, FOX Sports’ transformer robot. FOX execs have admitted that Cletus is football specific, and they forgot to design Cletus to talk.

How do I envision a partner utilizing MIKE?

offer one of its many sponsorship partners the opportunity to align with MIKE and incorporate witty, MIKE hosted cartoon shorts.

transform a standard microphone to morph into my cartoon MIKE as a creative means to promote a concert, event or theater performance or interact with its on-line talent.

use MIKE as an animated character personality in his own studio. In his already animated shorts, MIKE already pontificates and entertains on things witty, funny or clever. The MIKE studio is specifically designed with plenty of studio screens to house sponsor marks, messages and logos.

Can I see MIKE anywhere in the digital space? Yes, over the past few years, MIKE has appeared in 900+ sports blogs and he has “authored” 40 sports comic books in his series which appears on Amazon. The brand is currently monetized via affiliate relationships with NFL Shop, MLB Shop, NBA Store, NHL Shop, Sports Memorabilia and Fanatics.

808:Kylie Ansett is an author, book coach and business trainer

808:Kylie Ansett is an author, book coach and business trainer