Listen to this Episode (16:36)
0.75x
1x
1.25x
1.5x
2x
0:00
16:36
Apple PodcastsGoogle PodcastsPlayer EmbedShare Leave a ReviewListen in a New WindowDownloadSoundCloudStitcherSubscribe on AndroidSubscribe via RSSSpotifySubscribe on iTunesGet My Workbook 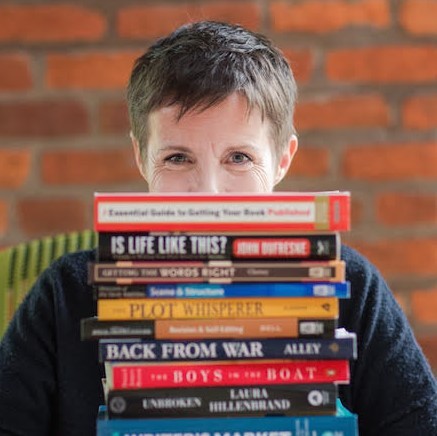 Caroline Lambert is an award-winning writer, speaker and writing collaborator. As a ghostwriter, book doctor and book coach, she helps people write their life stories, so they create a legacy. A recovering journalist, she is endlessly curious about life journeys and believes everyone has a story to tell.”
She has written the memoir of Sammy Lee Davis, a Medal of Honor recipient and Vietnam War veteran, who defied his physical limits to save his unit and became an advocate for veterans (You Don’t Lose ‘til You Quit Trying), published by Berkley Caliber, a Penguin imprint. She has collaborated with Nuhu Ribadu, Nigeria’s anti-corruption crusader and former Presidential candidate (Show Me the Money), and Tendai Biti, Zimbabwe’s former finance minister and Secretary General of the Movement for Democratic Change, the main opposition to the rule of Robert Mugabe (From Hemorrhage to Stability, A Personal Journey). She is currently collaborating with a former U.S. government official and with a former Cuban officer who led the Bay of Pigs invasion. She has also co-written a book advocating a novel way for oil-rich countries to avoid the curse typically associated with mineral bonanzas (Oil To Cash: Fighting the Resource Curse Through Cash Transfers).

During her eight years as a staff writer and Deputy Asia Editor for The Economist, she wrote about business, economics and politics in various parts of the world. She won the Diageo Africa Business Reporting Award and the Sanlam Award for Excellence in Financial Journalism for her coverage of Africa from Johannesburg. Her other assignments included covering post-conflict situations—and at times not so “post”—reporting from Afghanistan, Sierra Leone, Liberia, Zimbabwe and Algeria, among others.

Caroline Lambert holds an M.B.A from INSEAD and an M.A. in international relations from the Johns Hopkins University’s School of Advanced International Studies (SAIS). She also is a graduate of the Institut d’Etudes Politiques de Paris (Sciences-Po). A former Visiting Fellow at the Center for Global Development, she once worked for the World Bank, in a previous life. She lives in Washington D.C. with her South African husband and her daughter.

1573:Sydney Jane Axtell is the host of a podcast called Burnt Out.

1573:Sydney Jane Axtell is the host of a podcast called Burnt Out.

1715:Christina Eanes specializes in superachieving and it is her personal mission to help individuals achieve more in life

1715:Christina Eanes specializes in superachieving and it is her personal mission to help individuals achieve more in life