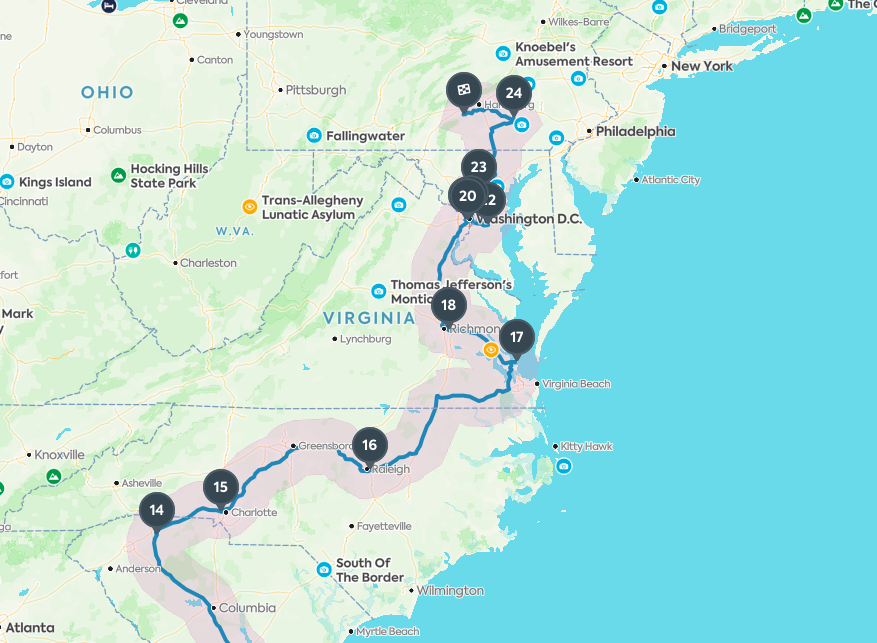 How did Day 7 of the
12minRVconvos podcast journey start.

My last memory of being at a train station wasn't one I found joy in recalling. Despite being around 8 or 9 years of age at the time the trauma is as vivid today as it was then. On one occasion there was a shooting, and on another, a conversation I had with a drunk man who was sitting opposite me. This was on a New York train around 1993. Today Amanda would have her first train ride. We would be taking the train from Alexandria to the US Capitol.

Day 7 of the 12minrvconvos podcast journey started with us parking at the home of Brian Nelson Palmer then walking to the nearest subway entrance, then getting our metrocard from a machine shown in the picture below.

Amanda looked as cool as a cucumber. The DC Metro was a beautiful upgrade in comparison to what I remembered of my New York childhood trip. This ummistakably created an easier experience for her

. You should have seen her with her eyes on the leader, Ryan Dean, for the cue to get off of the train.

How did you react?

Being on the train was not so bad after all. I thought driving would be easier. Oh, I was wrong. This was quick, affordable and easy on the body. I only had to sit and enjoy the ride. Ryan was our guide and he would indicate where and when we had to get off. No worries 🙂

Who did you
meet?

We walked out of the train, up the stairs and into the light to be amazed by the brilliance of all that was above ground. The parks, the buildings, the people. Ryan used his GPS to point us in the direction of the U.S Cspitol.

The U.S Capitol was huge. I had only seen it in movies. Now, we were actually here. I was invited by Stefani Zimmerman-Drake for our meeting point to connect face to face for the first time.

Stefani Zimmerman-Drake is a Public Relations Strategist at Water Mission

She was involved in a huge gathering to lobby the US government to act on behalf of the Burmese people. There were hundreds and hundreds of Burmese people dressed in their cultural wear. Having the opportunity to meet Stefani 565 days after our first conversation in this gathering and seeing her advocate for that which she was really passionate about was an honor.

I was thankful to have witnessed the demonstration of 'inspired action'.
​

Why didn't you interview people there?

I was looking forward to interviewing people of a different culture however the environment was challenging. The sounds of those present was loud. Then the internet connection was poor, it wasn't working well. Without mics, recording for future use would be a waste as well.

Other challenges we encountered was the language barrier, as the elders I was introduced to could not speak English. Lastly it was super humid!!!

What was the new plan?

We agreed on taking an Uber to our next meeting spot. This would be at the lobby of The Renaissance Hotel to meetup with Cathy E Smith. Due to our curtailed meeting at the U.S. Capitol we were a bit early for this meetup. This location rescued us from the sweltering heat. While waiting we were able to setup and get some work done.

Probably after one hour we got a phone call from Cathy. She couldn't make it due to health challenges. While Cathy was willing to go the extra to meet with us her wise father would not allow it. The resolve would be to meet her at her home on the following day.

Another change to the plans. Next up, we would Uber to our home on wheels parked at Brian's, then drive to meet Ivan Raiklin.

I was first introduced to Ivan one late night through a phone call from Anthony Witts. Anthony met Ivan at Social Media Marketing World somewhere between April 17-19, 2016 in San Diego, California and insisted that Ivan and I speak. We had a quick conversation and only reconnected months later for  a #12minconvo on 26th October 2016. On this day I would get to meet Ivan face to face, 966 days after.

Next schedule past podcast guest to meet was  Nina Babel, a fellow Trinidadian, at the El Techo rooftop restaurant. My first #12minconvo with Nina was on the 4th November 2016 and it was electric. Here we were 957 days after in Washington D.C. meeting her face to face. I was excited! Well Nina

After we returned to Brian's. Amanda and I would stay at Brian's place. Ryan took an uber to visit a friend who he would spend the night with.

Brian had a room that was decked out especially for guests, 5 star style. He had only one rule which was he only pours your first drink of choice, after that it's all up to you to get your own.

A 2014 report by Christopher Leinberger and Patrick Lynch at The George Washington University School of Business has named Washington, D.C. as the most walkable city in the U.S. The findings of this report we would put to test as we parked our vehicle, and on foot, made our way to the Metro Station. Here we were following the lead of Ryan. While taking the train was a new experience for me Engel's last train encounter was back in his younger days. I'm guess alot has changed since that time. I remember Engel looking at me with searching eyes trying to assess my composure on this maiden train ride. Based on this experience, my rating of this mode of public transportation was high. The process was actually quite fluid and not so scary as opposed to what I've seen on television.

Our goal this morning was to get to the U.S. Capitol to meet Stephanie. She did give us foreknowledge that she would be involved in a demonstration. Little did we imagine it to be a humanitarian effort for the Burmese people on such a large scale. The lawn was littered with Burmese nationals in their colourful, native wear. Washington D.C. did not fail to live up to the description of being a mecca for cultural experiences.

Despite being flanked by congress officials and elders of the Burmese people, Stephanie met with Engel for their recording. This had to be aborted though due to an amazingly poor internet connection and competing sounds of the demonstration. All in all it was rewarding to see yet another past podcast guest of Engel's, in real life.

Yes, Washington D.C. is walkable but on this day somebody really turned the thermostat up. As we made our way to our next stop, the sweltering heat forced us to take cover under a giant oak tree. From here Ryan summoned an Uber to continue on.

We alighted our Uber and stepped in to a hotel lobby to await Engel's next guest. We were bathed with a blast of air condition which took the edge off of our waiting time. It came to an end soon enough as our guest wasn't able to meet after all.

So what's one thing you do on a hot day like this? You head to the pool. Our next recording would be done poolside which was where Ivan was hanging out with his family. If you're wondering, no we didn't get in to the water. A nice idea but it wasn't on the agenda. After a delightful conversation we made our way to El Techo restaurant for a much anticipated meeting with Nina. This was fun because Nina was a Trini to 'd' bone just like us. Here we were all speaking the same language. This was a welcomed punctuation but as with all good things there comes an end.

Our next stop would be our host for the night. Brian was a gracious host and it seemed as though he and Engel could talk all night. I don't know if they did because after recording I made preparations to answer the call of sleep. My body literally melted away once contact was made with the bed. The activities of this day left me wiped out.

If you missed out on Day 6 and you are curious to catch up click HERE.

1137: Winston A. Henderson figured out strategies that help break through mental barriers to success

1137: Winston A. Henderson figured out strategies that help break through mental barriers to success

701:Michelle Norris is the driving force behind the Paleo f(x)™ enterprise

701:Michelle Norris is the driving force behind the Paleo f(x)™ enterprise

1566:Bryan Wish is working to unleash the creative potential of our generation to build a more meaningful world

1566:Bryan Wish is working to unleash the creative potential of our generation to build a more meaningful world

Bailey Smith: I am Using My Voice To Help Others Overcome What We have been Through /Ep2364
Load More