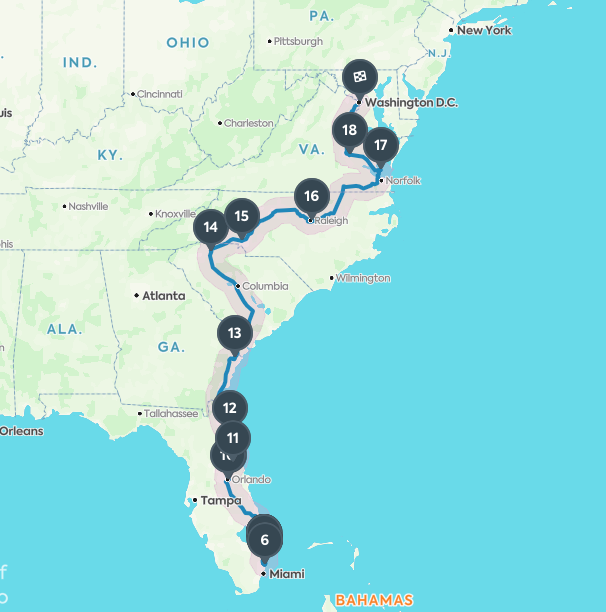 How did Day 6 of the
12minRVconvos podcast journey begin.

Day 6 was great. The Dean’s injected HOPE. Like the good old days, our wagon was packed with supplies and we were all rested. Ryan got us all caught up with the uploading of videos and photos on social media the night before so we were starting again on a new page. Ryan made a plan for the next two days and Amanda and I were ready to execute.

How many miles would you have to drive?

An average of 200 miles. Our first stop was Richmond. The driving would be light on this day. When we left the home of Ryan, we stopped at a car wash where we could vacuum our home on wheels for free. Yes, for free. The car wash offered a free vacuum service on Sundays. It was the first time I had seen a service like this for vehicles. Again Ryan was the man. He was our guide, the person who knew the terrain.

We were on our way to meet Anthony Hayes and Petra Monaco at a Publix in Richmond. Anthony Hayes was episode 149 and Petra was episode 924 on my podcast. Anthony was on the podcast in 2016.  Anthony is one of those persons that supported me when I first set out to have 1509 #12minconvos is 3 months by sharing my podcast goal in his Facebook Group called Podcast Discovery Center. To this day Anthony remains a supporter. This is a testimony to the power of a conversation.

Looking back at the history while writing this I realized that I interviewed Petra on November 29th, 2016 and Anthony on 29th September 2016. Within two months I moved from Episode 149 to 924 and today I would now meet each person face to face.

How did if feel to meet them for the first time?

What was a disappointment of Day 6?

There were two disappointments. The time I got to spend with Anthony and Petra and the audio setup we were using to record. Our equipment setup was very limited. We were between the use of a Gopro and an Iphone. I felt as though I wasn’t doing justice in delivering quality content.

The plan would be to get our equipment upgrade at B&H in New York on Day 10. Until then we would have to improvise and hope for the best. In my younger, less patient years this would have bothered me to the point of stopping the entire project. Thankfully, with age brought wisdom and great counsel. Amanda and Ryan buffered the experience. They were supporting in every way they could to make the best of the situation. Could you imagine what it would be like if I was doing all of this by myself? I would have lasted a day.

“For they refreshed my spirit and yours also. Such men deserve recognition.” 1Cor 16:18 NIV This was the feeling we arose with on day six of our quest. I must give due recognition to the Dean’s for their contribution to the 12minrvconvo podcast journey. The time to saddle up again soon came, but not before we took some pics in the brilliant sunshine. Interestingly, our departure would occur twice, as something essential (memory fails me here) for the trip was left behind. As we made our way to Richmond Ryan was our local tour guide.

At a Publix Supermarket in Richmond, the recordings of Petra and Anthony were done. It was an absolute pleasure to witness the sheer joy of Engel meeting his past podcast guests. The show of recognition, the smile, and the embrace were all priceless. Interestingly, the recording location came in its variety on this trip. Minus the occasional PA system announcements, this location was a cool flick. We, however, identified that the quality of the recordings needed to be improved.

After recording, we made our way to Washington, D.C. The rest of this evening was spent preparing for the next day ahead. Preparation entailed settling into a hotel (rest), having Pad Thai for dinner (nutrition), taking an evening walk through parts of the town (exercise), and discussing the plans (communication). I must confess I’m not a night person, so while Engel and Ryan were up late working out logistics, I was taken hostage by sleep only to be released at 5 am the next morning.

Where did you sleep that night?

Ryan, Amanda and I agreed that we would share a room at a well-known hotel I will not name here. This was a bonus that Ryan secured for us through his family connections. This would be the secret weapon we could use if we didn’t have an alternative option.

Our dinner that night was  a surprise gift given to us by Ryan. He was familiar with DC and insisted we have dinner at one of his favorite restaurants. We took the hotel transportation downtown and got to experience Pad Thai for the first time. This was Ryan’s wedding anniversary gift to us. We then shared a fun walk back to the hotel and got prepped for the next day where we would meet other #12minconvo podcast guest at the U. S State Capitol.

12minrvconvos podcast journey, Day 4 of 84, no place to stay.