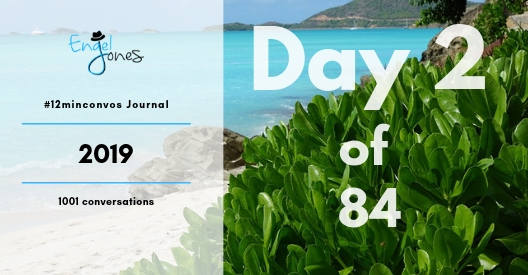 Day 2 started with me awaking at 4am and then deciding to take a quick nap before my 4:30am #12minconvo. NB. This plan NEVER works out well. It's a plot of the mind I believe telling you, that  just a few more minutes rest would make a world of difference. Luckily my internal clock sent off an alarm at 4:28am. I quickly reached for my phone and opened my calendar to see that the scheduled time was actually 4:15am.

What did you do?

I quicky jumped over Amanda and took a couple of steps to my #12minconvos podcast quarters. Opening my computer while filled with disappointment of the possibility of missing a #12minconvo, I made the call and thankfully there was an answer on the other side.

Who did you speak with?

Marina Barayeva, located in Benjing, China. She was online and available. We spoke overall for about 30 minutes as my next conversation would not be until 5:00am. So we recorded our #12minconvo then had a great chat after. Marina is a known authority in helping entrepreneurs become influencers in their niche. She has been featured in media such as ArtPeople, CCTV, China Radio International, and others. More to come on her #12minconvos podcast #2028 when released.
Sneek Peek -Her favourite song at 12 can be listened to here.

At 5:00am we ended our chat and I connected with Dr. Haidar Al-hakim, located in the United Kingdom. Our conversation was switched into an exchange of thoughts on the subject of the third eye. Very interesting. He invited me to his podcast called the Surgical Spirit Podcast in June to be a guest. I am excited for that conversation. Until then I will add his book to my reading list for 2019, Physician On Fire. More to come on his #12minconvos podcast #2029 when released. Sneek Peek-His favourite song at 12 can be listened to here.

Somewhere in between my first and second conversation, Amanda exited the room and began her morning reading. After my second early morning #12minconvo we went for a walk and took out the garbage.

Who else did you speak with?

My third #12minconvo was scheduled at 7:45pm with Jemimah Ashleigh. N.B In a short conversation it is important to adapt, not change who you are but be able to adjust your talking and thinking speed accordingly. From our conversation I gathered that Jemimah is a quick thinker and talker. Located in Canberra, Australia she is an Entrepreneur, Speaker and author of Position Me. I thoroughly enjoyed our conversation. More to come on her #12minconvos podcast #2030. Sneek Peek-Her favourite song at 12 can be listened to here.

At 8:00pm I had Scott Corney scheduled but he was a no show. Hope all is well with him.

I then connected with Albert Zbily earlier than planned and had an electrifying #12minconvo with him. Albert is the President at Fédération Internationale de Football Corporatif (FIFCO). He is also a ⎮Keynote Speaker ⎮ Lecturer ⎮ Consultant located in Montreal, Quebec, Canada. Albert's enthsusiastic energy for what he does could not be hidden in his voice. More to come on his #12minconvos podcast #2031. Sneak Peek-His favourite song at 12 can be listened to here.

What was your biggest takeaway?

"The second we both play on a field and sweat it out we create a connection and it's that much easier for me to bond with them, then sell to them...". This was shared by Albert Zbily. These were the words spoken to him by someone who plays in FIFCO.

I usually purchase products and service from people I know, trust and like. Are you having the conversations you need to for all aspects of your life?

1546:Dorit Palvanov is a wife, mother of three girls and a health coach for women and girls

1546:Dorit Palvanov is a wife, mother of three girls and a health coach for women and girls

845:Delia Athey is a Financial Professional with Prudential Financial in San Francisco

845:Delia Athey is a Financial Professional with Prudential Financial in San Francisco